This week, we’re shaking down South America’s sassiest city: ‘the Paris of the South’, Buenos Aires.

Known affectionately by many a traveller as simply ‘B.A.’, its original name was actually ‘La Ciudad de la Santísima Trinidad y Puerto de Santa María del Buen Aire’, or, ‘City of the Most Holy Trinity and Port of Saint Mary of the Fair Winds’.

Home to the sensual Argentine Tango, the world’s juiciest bife de lomo steak, and the most famous football match in the world – the superclásico – this is a city that will stay with you long after you’ve left.

We’ll be talking you through the must-see attractions of the city; how to get from A to B (Or B to A… geddit?); where to go for the best steak in town, and where to head to once you’ve had enough of the city.

In case you’re not quite au fait with your South American geography, Buenos Aires, the capital city of Argentina, is on the western bank of the Rio de la Plata, about 150 miles from the Atlantic Ocean. It is the country’s largest and most populated city; home to about a third of Argentina’s population of 42 million.

With a humid subtropical climate, it’s rarely cold, but does have four distinct seasons. Spring is warm and mild, summer very hot and humid, autumn clear and crisp and winter nippy and a little grey.

The city’s inhabitants are known as Porteños, (people of the port), as B.A. is the country’s chief port, and, in fact, the busiest port in the world.

Even if you’re not travelling by freight liner, getting to Buenos Aires couldn’t be easier. Scoring cheap flights to Buenos Aires is easy, and you’ll be dropped at Ezeiza International Airport, about 35km outside of the city centre.

To get into the city, avoid the queues of dubious looking taxi drivers, and hop on the Manuel Tienda León coach (AR$60 – about £9 – each way), which is a safe and comfortable way to get into town. The coach will drop you at the Terminal Madero bus station, and they will arrange for a private remis taxi to take you from there to your hotel. Easy!

Getting around Buenos Aires

Getting around Buenos Aires can take some getting used to, and you might discover that, particularly during the hot and humid summer months, walking is your best bet.

The city is broken up into barrios, or neighbourhoods, each with its own individual personality. There’s up-market Recoleta; trendy, young Palermo; business-minded El Centro; down-at-heel San Telmo; modern Puerto Madero, and colourful, touristy La Boca. They are all quite distinct, and you’ll find that residents remain loyal to their local areas, sports teams and traditions.

B.A. is laid out on a grid system, with block numbers in the hundreds. The blocks are usually of equal size (100m squares) and most streets are one-way, with the adjacent parallels going the other way. This is a good thing to consider when it comes to hailing taxis and catching buses: make sure the traffic is going the right way before you get on! If it’s not, just go to the next street down and Bob’s your uncle!

If you fancy stepping out of your comfort zone a little, hop on one of the hundreds of city buses. Although there is an underground system, it is very limited, so buses are the most popular way for porteños to get around. They are on quite a complex route map, and can get extremely crowded, particularly during the hectic rush hours, but are by far the cheapest way to travel around. Try and keep hold of your coins, as the ticket machines only accept correct change, and as such, these precious pieces of copper can be quite hard to come by!

What to see in Buenos Aires

Although it is on the list of pretty much every traveller to South America, Buenos Aires is actually not as well equipped to deal with tourists as you might expect. In comparison to the likes of London and New York, you might find Buenos Aires a bit lacking in museums and tourist attractions.

That said, the fun is in searching out the entertainment, so go for a walk around the city and you’ll find yourself bumping into some recognisable sights, and uncovering plenty of hidden gems.

The area that is most kitted out for tourists is Caminito street in La Boca. This is recognisable for its brightly painted clapboard buildings, complete with garish plastic figures of Argentine legends Evita and Maradona (of course…) popping their heads out of the windows. Although it can seem a little tacky, Caminito makes for a lovely area to spend a couple of hours in the afternoon sun, soaking up the atmosphere with a cup of fantastic Italian coffee.

One of the first things people associate with Argentina is the tango. You’d be crazy to go all that way and not see a tango show. The passion and intimacy that plays out on stage is thrilling, and we challenge you not to try those leg flicks yourself after a couple of bottles of Quilmes beer with dinner!

Nowhere else in the world do they celebrate the dead quite like they do in Buenos Aires. Recoleta Cemetery, home to the intricate and over-the-top tombs of Argentina’s wealthy, is a great place to spend an hour or two in quiet contemplation. Of course Eva Peron’s grave attracts a considerable amount of attention, but many find it is not quite worth the fuss.

Outside the cemetery is the brilliant Recoleta artisan market which sets up on the weekend. Selling local arts and crafts, it is the perfect spot to pick up a souvenir, be it that much lusted-after Maradona football shirt/ statuette/ poster/ dinner plate (delete as appropriate), or a more authentic piece of hand-made precious stone jewellery. 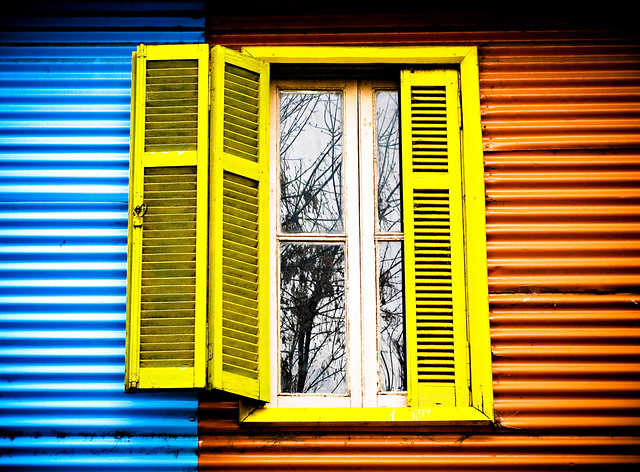 Events in B.A. are sporadic but quite well done. A great place to look out for information on local cultural events is the bilingual city tourist website which should keep you up-to-date.

If possible, try to arrange your trip around a football match. These are world-famous for their incredible atmosphere – think chanting, standing crowds, fireworks in the audience and flags waving everywhere you look. Just be sure to take your common sense with you and leave your valuables at home!

The Buenos Aires Tango Festival, occurring late in the month of February and running into March, sees some 100 performances by over 150 dancers and musicians and is well worth the visit and a great opportunity to learn some moves yourself. 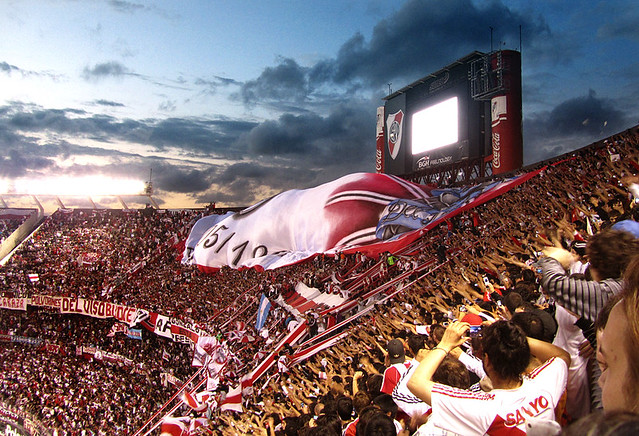 If you’re not convinced about a trip to Buenos Aires yet, then this section might just push you over the edge.

Argentina’s food is world-famous and its strong European influences mean that it’s not just steak that you have to look forward to.

Get your grill on at incredible La Cabrera restaurant in Palermo Viejo (Cabrera 5099), where you can enjoy a traditional Argentine meat feast of bife de lomo (fillet, cooked al punto, – medium rare – for best results), bife de chorizo (sirloin) or chateaubriand (slow grilled centre cut lomo). It all comes out on a wooden platter with little pots of side dishes, such as roasted garlic, for garnishing. Do as the locals do, and don’t bother with too much in the way of vegetables. Just wash it down with a glass (or bottle) of full-bodied Malbec! Is your mouth watering yet?

Other specialities include the pastries that the capital is (quite rightly) very proud of. With 97{8105bc8a7da0e4ee2985a05e217cd0e1bef95b551bf8bafd62a449e444182173} of its population coming from white European roots, bakeries are, understandably, rife in the capital. Be sure to try a selection of empanadas (filled pastries, similar to pasties), medialunas (croissants) and pasas (small shortbread-like biscuits).

For a taste of history, visit Café Tortoni, on the famous Avenida de Mayo, close to Evita’s infamous balcony at the Casa Rosada. This little café was a favourite of Argentine tango dancer, Carlos Gardel, and has not been decorated in at least a century.

Mate (as in ‘mar-tay’, not ‘who’s yer mate’) is an Argentine institution. This strange tea, served in a gourd, confusingly also called a mate, might take some getting used to for a foreigner. Very bitter and naturally high in caffeine, it packs a punch! 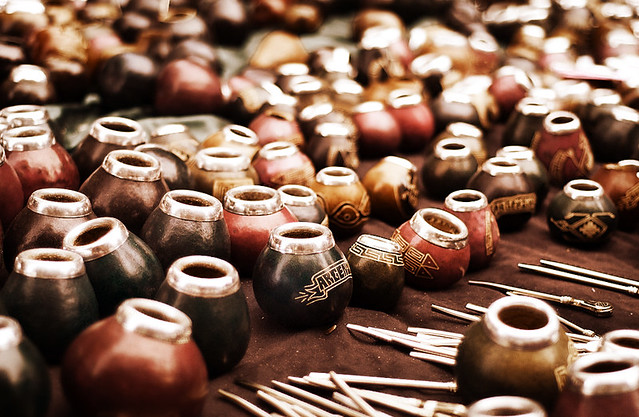 Get to know the customs surrounding the drinking of mate before trying it, as it can cause some offence to refuse it. Mate is traditionally drunk as part of a group, with the gourd being passed around from one to another. It is supped through a metal straw, called a bombilla, and the person who made it traditionally takes the first sip. Each person in the group then drinks the entire gourd and refills it with water before passing it on to the next. No ‘thank-yous’ are necessary, and don’t get involved with this unless you are prepared to drink the entire cup-full!

There are loads of great accommodation options in Buenos Aires, to suit all budgets.

Favourites include Milhouse Hostel – a party place, geared up to cater to the backpacker crowd, with organised nights out and a banging bar on the ground floor, and Bohemian Boutique, a modern hostel with great, clean rooms. Prices start from £12 for a dorm.

Buenos Aires is just the tip of the ice berg when it comes to Argentina. After a few weeks in the smoggy city you might be ready for the fresh air of Northern Argentina’s gaucho-filled Pampas, so why not head away to the thundering Iguassu Falls, on the border with Brazil.

If mountains are more your thing, head south and explore the wilds of Patagonia. At the heart of Argentina’s Lake District, this is the ideal tour for exploring the hiking trails, lakes and rich culture of Patagonia.

Rough and ready on the outside, but full of hidden gems on the inside, Buenos Aires is fast becoming a favourite among travellers seeking new thrills. We all know someone who’s been there and loved it; this time it could be you!

If you’ve got any tips for people looking to visit Buenos Aires, throw them in the comment thread below so that we can all benefit from your wisdom.